Captain William H. Fulford was attracted to what is now North Miami Beach during his Coast Guard patrol along the Atlantic side of the peninsula during the Spanish-American War. In 1881 he explored Big Snake Creek (later renamed the Oleta River) and found this area amid lowlands, marshes, and mangroves, a retreat from the fury of the Atlantic. See Oleta River State Park History.

When Henry Flagler extended the Florida East Coast Railway from West Palm Beach to Miami in 1896, he placed depots at numerous spots along the route, and small towns quickly developed around those stops. Many of the settlers to the area were homesteaders who were attracted to the area by offers of 160 acres of free land by the federal government. In 1897, utilizing the Homestead Act, Captain Fulford acquired a 160-acre land patent from President Grover Cleveland.

During the 1890s settlers established farms along the east side of the Oleta River. That area was originally named Ojus in 1897 by Albert Fitch, a farmer who wanted to grow pineapples in the rich soil. The word Ojus is a Seminole word for "plenty" or "lots of", and when Fitch was in the area, Ojus grew plenty of peas, beans, sugar cane, and tomatoes.  See A Bit of Ojus History.

The distance between Fulford and Ojus was only a mile or so, but it was great enough in those days of poorly paved roads and difficult travel conditions to generate separate communities. In the early 1900s rock mining in the area began and it was discovered that the rock coming out of Ojus had qualities that made it ideal for road building. Rock mining continued around the area, creating many lakes such as Maule Lake and the lakes in the Sky Lake neighborhood.

In 1912 Lafe Allen, a former newspaper owner, came to Florida. He and an associate purchased Captain Fulford's original grant plus additional property with the idea of developing and selling lots. Eventually, they purchased 557 acres of land. In 1917, Mr. Allen made plans for a "perfect city" calling for 80-foot wide residential streets and 100 and 125-foot wide business thoroughfares. North Miami Beach's street layout is as the pioneer pictured it in 1917 with wide avenues named Fulford Boulevard (now known as Northeast 172nd Street) and Flagler Boulevard (now known as Northeast 19th Avenue). The Fulford-by-the-Sea Company began selling lots in 1922. During the Florida land boom of the 1920's, lots were sometimes sold eight times before ever being recorded. 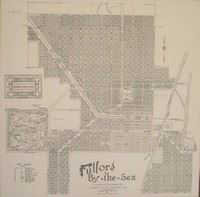 The years of 1924 through 1926 saw rapid developments when Merle C. Tebbetts, president of the Florida Cities Finance Company, took over development. A Chamber of Commerce was formed to disseminate information and produced the Fulford By-the-Sea News, a monthly newspaper providing development news for the area.  A group of administrative buildings were located in Central Park, on the area occupied by today's city hall building.

One of south Florida's first radio stations, WGBU, a 500-watt station, began broadcasting in 1925 from its 150-foot tower also located in Central Park. A power plant generating 125 kilowatts was built on Flagler Boulevard opposite Central Park. 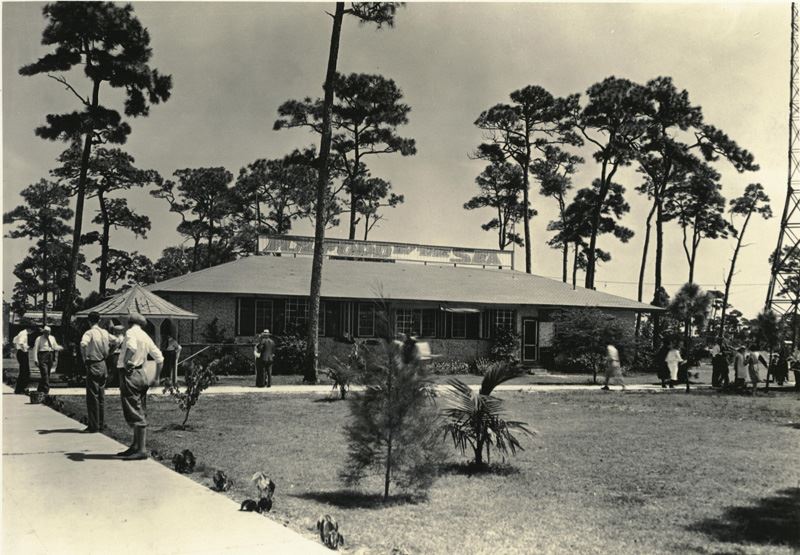 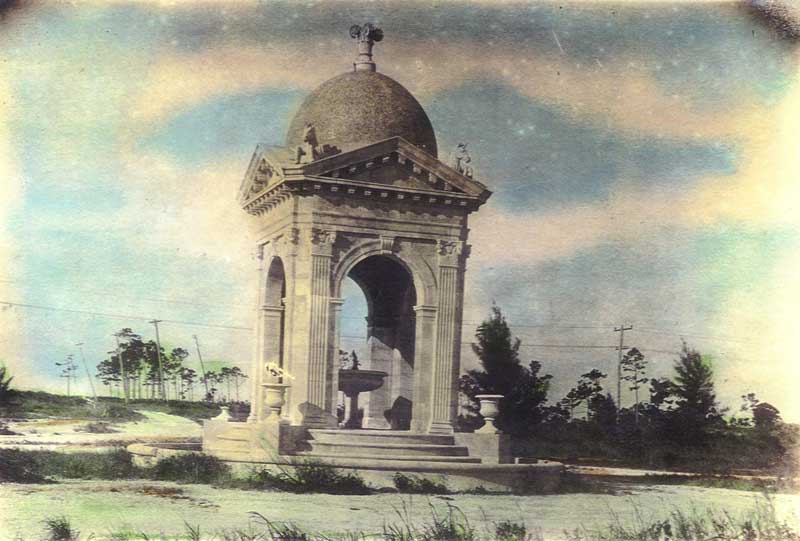 There were a great many people from all over the United States with money to invest in the great Florida Land Boom of the mid-1920s. They flocked to South Florida in hopes of getting riches made when orange groves and swamp lands were subdivided, sold, and developed.

Merle Tebbets brought people in from all over the state by busloads to see his Fulford By-the-Sea and to give his land sales pitch.  He also brought them up from Miami Beach using his tour boats on the Intracoastal Waterway.

In 1925, Carl Fisher (who built the Indianapolis Speedway in 1909) was developing Miami Beach and envisioned this area as the winter auto racing capital of the world. He built the world's fastest 1-1/4 mile "boardtrack" (a wooden, oval race track). The outstanding features of the track were the 50-degree banked turns. Turns banked this steep required a speed of at least 110 miles per hour to keep the race car from sliding down into the infield. The turns at today's Daytona International Speedway are banked at only 32 degrees. In 1926, the Fulford-Miami Speedway held its first and only racing event attracting a crowd of 20,000 spectators, some of whom paid up to $15 for a box seat. It was located at the northern end of Flagler Boulevard (NE 19th Avenue) in today's Sky Lake neighborhood before being demolished in the hurricane of 1926.

See a collection of images of Fulford Speedway. 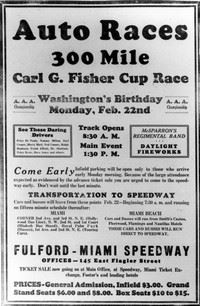 The city, which had been unincorporated at the time of the great hurricane in 1926, sustained devastating damage. The speedway and radio station were blown down and demolished. The hurricane essentially ended the South Florida real estate boom, and it did not flourish again until after World War II.  In an effort to obtain funds and assistance to alleviate their losses and suffering, the local residents banded together as the Town of Fulford and in 1927 incorporated as the City of Fulford.

See a collection of images from the 1926 Hurricane. 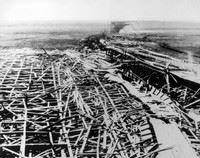 The City is Renamed

In 1931, the state legislature authorized a new charter for the city. Beachfront property was annexed and the name of the municipality was changed from Fulford to North Miami Beach to reflect the 1931 boundaries and to take advantage of the nationwide advertising associated with the Miami Beach area in an effort to capitalize on that city's growing fame. At that time there were about three miles of beach property from Sunny Isles south that were in the incorporated area, so it was a legitimate name. By 1933 there was a councilmanic form of government with five council members and a mayor as the capital head.

In this photo, the building on the right was the the original 1923 North Miami Beach Chamber of Commerce building, later used as a City Hall in the early 1930s.

In 1936, President Franklin D. Roosevelt signed approval of a Works Progress Administration appropriation of $16,000 for remodeling and rebuilding the old Fulford By-the-Sea power plant building (located on the west side of Northeast 19 Avenue at Northeast 170 Street) into a city hall. 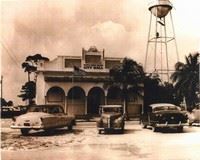 A.O. Greynolds owned an old rock quarry near the Oleta River in Ojus, a site which had been inhabited by the Tequesta Indians and had later become a Seminole trading post. As road construction moved north, the quarry was abandoned. Dade County approached Greynolds to donate the land for a park and agreed to name it after him. See the transformation of this Rock Quarry to Park Oasis (PDF) that in 1936 became a popular Miami-Dade County park for the residents of North Miami Beach.

In 1945, the city issued water bonds and the Sunny Isles Water Company was purchased. The second water expansion project was completed in 1954. Metered water customers increased from 1,611 in 1951 to over 32,000 today.

Originally built in Spain in 1141, the monastery was purchased in 1925 by William Randolph Hearst and the structures were dismantled stone by stone, packed in wooden crates, and shipped to the United States.  It was reassembled at its site of 16711 West Dixie Highway in the early 1950s and has become a popular location for weddings.

In 1958, a new charter was voted on making the city a council/manager form of government which still prevails today. 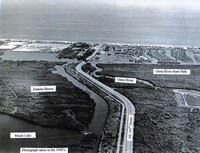 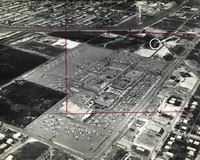 From 1961 to the present, growth and development have been impressive. The city embarked on a $2.1 million public works program having as its core a new four-story city hall with an adjoining auditorium and swimming pool which was completed in 1963. Also included was the street widening and beautification of NE 19th Avenue, coupled with street lighting from NE 163rd Street to 185th Street, widening of the 19th Avenue Bridge, construction of a new bridge over the Snake Creek Canal on NE 15th Avenue, and the extension of street lighting on NE 163rd Street from Biscayne Boulevard to the Sunny Isles Bridge.

In 1965, a new public safety building was erected on the site of the old Fulford By-the-Sea waterworks. In the same year, the Lafe Allen Memorial Library was also constructed.

The City Council changed the name of Northeast 164th Street to Hanford Boulevard in 1975, in honor of Lenore Hanford, whose father was one of, if not the City’s most influential early pioneers, Lafayette Allen. Lenore Hanford presided over Allen-Hanford, Inc. for many years. Hanford led the effort to build North Miami Beach Boulevard (S.R. 826 and 163rd Street), and in the 1950s, as housing development boomed, observed the construction of the Mall at 163rd Street. The Mall, which was the first regional mall to be built in Florida, is the western anchor of Hanford Boulevard.

The 1980s were typical of the growth and development from the prior years. The city expanded its parks, beautification was intensified, and in 1984, a new addition was added on to the existing city hall complex.

Over the next five years, there were impressive gains in new construction, commercial renovations, new business development, retail sales, beautification, and more. These strides are the result of a city council dedicated to the future health of its business community. The city council has expanded beyond the traditional city role with a program of policies and services designed to encourage real estate and business.

Construction of addition to City Hall

In 1993 the voters in North Miami Beach approved a $10 million bond issue to build a state-of-the-art police station and redevelop infrastructure in the Government Center neighborhood. The new Public Safety building was built at 16901 Northeast 19th Avenue, just south of the City Hall building. The success of the Government Center Project provided additional momentum to the city's efforts to promote neighborhood stability throughout the city.

In 1994, the library completed a major three-year expansion and renovation project that doubled its size to over 23,000 square feet. 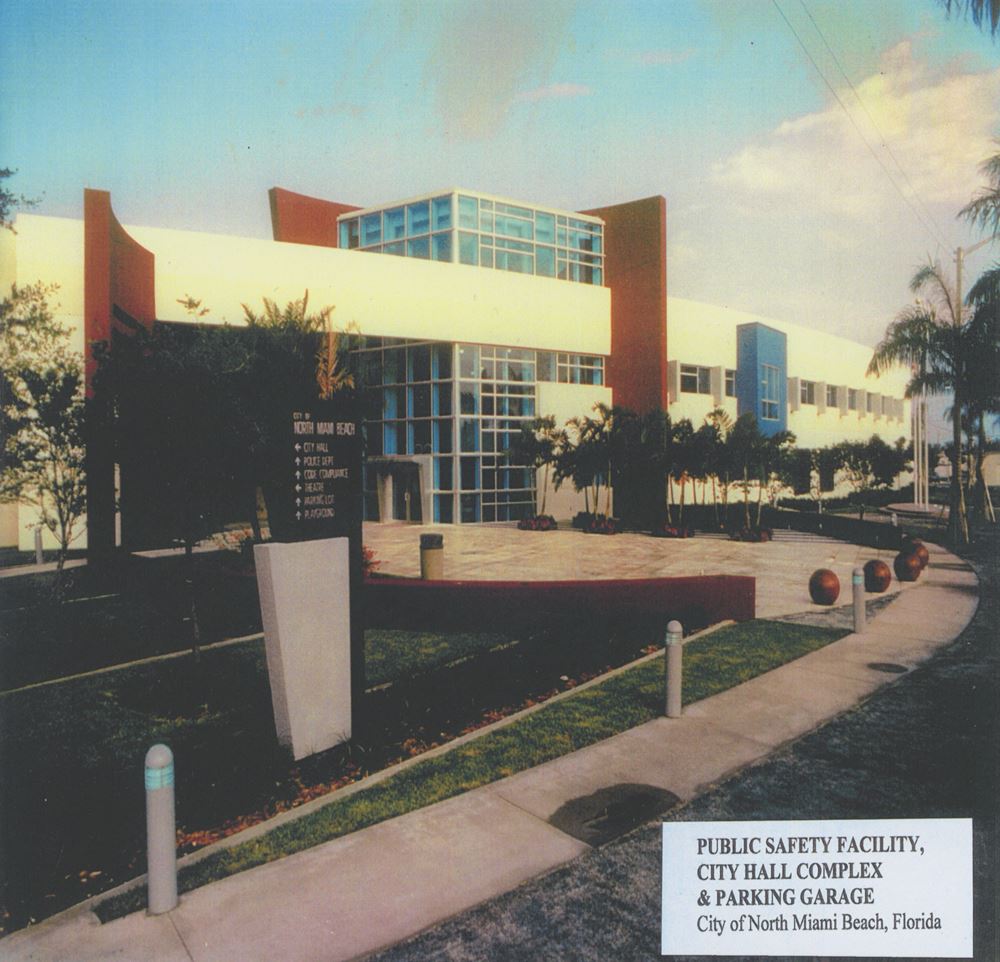 In September 2000 the voters approved a $17.5 million bond issue for neighborhood construction improvements. The bond program known as Proud Neighborhoods consisted of 67 different projects aimed at upgrading streets, sidewalks, lighting, and landscaping in each neighborhood of the city. Completed in August 2006, this five year construction program brought dramatic improvements to the City's neighborhoods, and led to an advertising campaign called "Now More Beautiful".

With excellent municipal facilities, fine police protection, good cultural programs and services, the residents and community leaders want everyone to know that the City of North Miami Beach is the city "Where People Care". 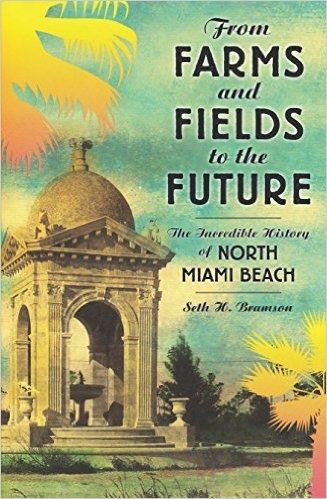 Learn more about NMB's history in "From Farms and Fields to the Future: The Incredible History of North Miami Beach," by local author Seth H. Bramson. This book is available at local bookstores, or online on Amazon or Barnes and Noble to name a few online retailers. It's available in paperback, Kindle, and Nook formats.