Hanford Boulevard is so named in honor of Lenore Hanford, whose father was one of, if not the City’s most influential early pioneers, Lafayette Allen. Lenore Hanford presided over Allen-Hanford, Inc. for many years. The company, originally run by her father, transformed the 1920s community known as Fulford-by-the-Sea into present-day North Miami Beach. Hanford led the effort to build North Miami Beach Boulevard (a.k.a. S.R. 826 and 163rd Street) and in the 1950s, as housing development boomed, observed the construction of the Mall at 163rd Street. The Mall, which was the first regional mall to be built in Florida, is the western anchor of Hanford Boulevard.

According to historical documents, Hanford maintained a vision for the creation of a beautified, more local alternative to SR 826, linking the mall to West Dixie Highway to the east. Recognizing the foresight and vision of Mrs. Hanford and her numerous contributions of lands to the City for public purposes, the City Council changed the name of Northeast 164th Street to Hanford Boulevard in 1975. As south Florida’s urban revitalization trend waves thru North Miami Beach 50 years later, Hanford’s vision for a beautified, local business corridor alternative is coming true. 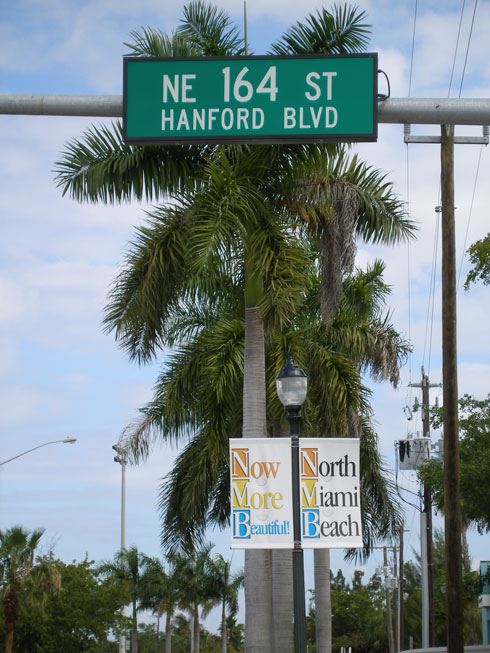 For one week during May of 1999, North Miami Beach's stakeholders teamed with experts in the city planning and landscape architecture to develop a vision for City Center - the new civic, cultural, and retail heart of NMB.

Using the process known as a Charrette, the group imagined a City Center featuring Hanford Boulevard as North Miami Beach's mainstreet - an exciting and attractive, pedestrian-friendly place in which people from all walks of life could enjoy working, residing, shopping and entertaining themselves. 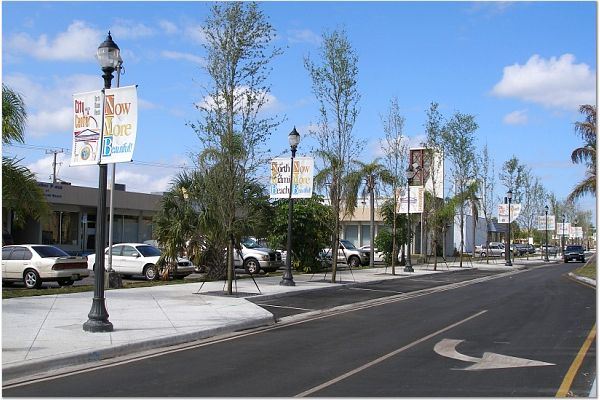 The first phase of reconstruction on Hanford Boulevard began in 2000 and involved 1 block from NE 19th Avenue to NE 18th Avenue.  It was completed in May 2002.

With the successful completion of the demonstration block, the City began to complete the reconstruction on the remaining sections of Hanford Boulevard to the west, ending at NE 15th Avenue, and to the east, from NE 19th Avenue to West Dixie Highway.  Completed in March 2007, the City celebrated with a ribbon cutting ceremony on March 30, 2007.

View photos from the Ribbon-Cutting Ceremony.